If you were to poll veterinary employees about their pets, you would find that the majority have minimum one oddball. It might be due to a medical condition that developed after we’ve had them, but sometimes we know that we are committing to a pet who needs unique care. Our technician Christie knew exactly what it meant to take responsibility for a cat with cerebellar hypoplasia – she just couldn’t resist sweet Nepeta! 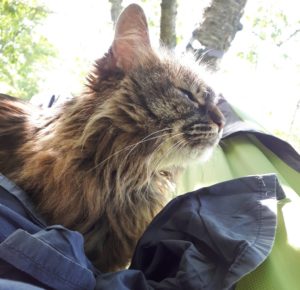 Nepeta is a 5 year old cat who Christie fell in love with when she was working at the SPCA. Nepeta’s condition occurs when the part of the brain called the cerebellum does not fully develop at birth. The cerebellum controls motor skills and coordination, so as a cat with an underdeveloped cerebellum, Nepeta has some pretty interesting moves! She moves with jerky movements, falls over, shakes, and appears to have trouble walking – but this is all just normal life for Nepeta, and thankfully cerebellar hypoplasia is not a progressive disease and will not worsen as an animal ages.

In cats, cerebellar hypoplasia often occurs in kittens born to a cat who has contracted feline panleukopenia while pregnant. Due to the virus, there can be incomplete development of the kittens’ cerebellums, and so cats like Nepeta are born.

Christie was working at the SPCA when Nepeta (about 1 year old at the time) moved from a foster home into the shelter. As soon as Christie saw her, she was in love. 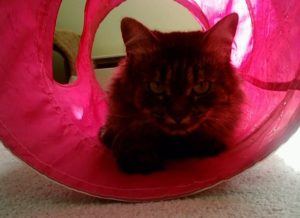 As any cat owner knows, cats love to jump and climb – and Nepeta does her best with the abilities she was born with. She climbs without any sort of grace, and as far as jumping goes, it’s only ever jumping down from higher ground rather than jumping up. Christie has gotten accustomed to Nepeta’s abilities (or inabilities) over the years, and found ways to help Nepeta navigate her living space.

With Nepeta’s unpredictable—even to Nepeta herself—movements, creating a safe environment has been so important. For example, because Christie’s bed is one of Nepeta’s main hangouts, she would use her claws to climb up the bedsheets like a mountain climber – sometimes resulting in shredded sheets, or sometimes resulting in Nepeta taking a tumble. In order to minimize damage to both Nepeta and the bedding, Christie built Nepeta a set of carpeted stairs to make the journey easier for her. She still has the occasional fall, but the frequency has drastically decreased.

Because carpeting is such a help to Nepeta, Christie has also opted to limit Nepeta’s access to areas of the house with carpeted floors; a baby gate does the job of keeping Nepeta in her safe space since she cannot jump, while the other household cats have the freedom to hop over the gate as they please. 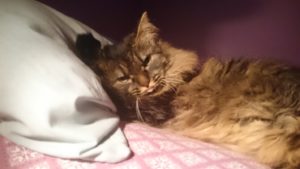 One of the quirks of Nepeta’s movements that Christie discovered earliest was her talent for knocking over litter boxes. On her first night home chez Christie, she was set up with an uncovered litter box – the following morning, Christie woke up to find the box upside-down beside a pile of litter, with a nice little present on top. No matter how often Christie flipped the box back over, it always ended up upside-down or flipped over. In order to keep the floor clean and keep Nepeta from knocking herself with the litter box, Christie switched to a covered box. Normally we are reluctant to use covered boxes because many cats are averse to the odours being trapped inside and the feeling of having only one escape route, but this has proven to be the safest option for Nepeta.

Although Christie has also seen Nepeta deliberately flip her food dish over in order to eat kibble off of the floor…maybe Nepeta just finds joy in making a mess? Thankfully she doesn’t tip over her water bowl!