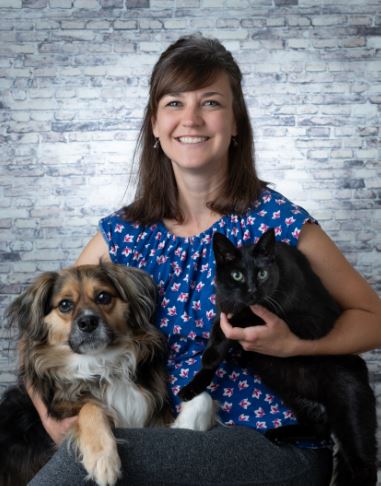 Dr. Dominique Solecki graduated from the Ontario Veterinary College in 2009 after completing her undergraduate degree at Queen’s University in Kingston.

Dominique has met many veterinarians, technicians and support staff who have been integral to her career during her time in Small Animal practice in Ontario (in Brantford and in Muskoka) as well as in Boston.  Despite moving away from Halifax in 2015, Dominique couldn’t stay away and returned to Eastern Passage Village Veterinary Hospital in 2020.  Dominique had a busy 5 years away during which she got married, bought her first house and had her first child.  The most recent addition arrived in January 2021- a little brother to sister Sammie, named Everett.
Dominique is thrilled to be back at Eastern Passage amongst familiar faces- both staff, clients (and patients)!  In her currently non-existent spare time, Dominique loves to spend time in nature, dance and cuddle her original two ‘children’- Finnegan and Peacock